At Home | British journalist, published author and mum of two, Annabel Kantaria, takes us into a home to show us a project of another kind, her stunning new Hacker kitchen 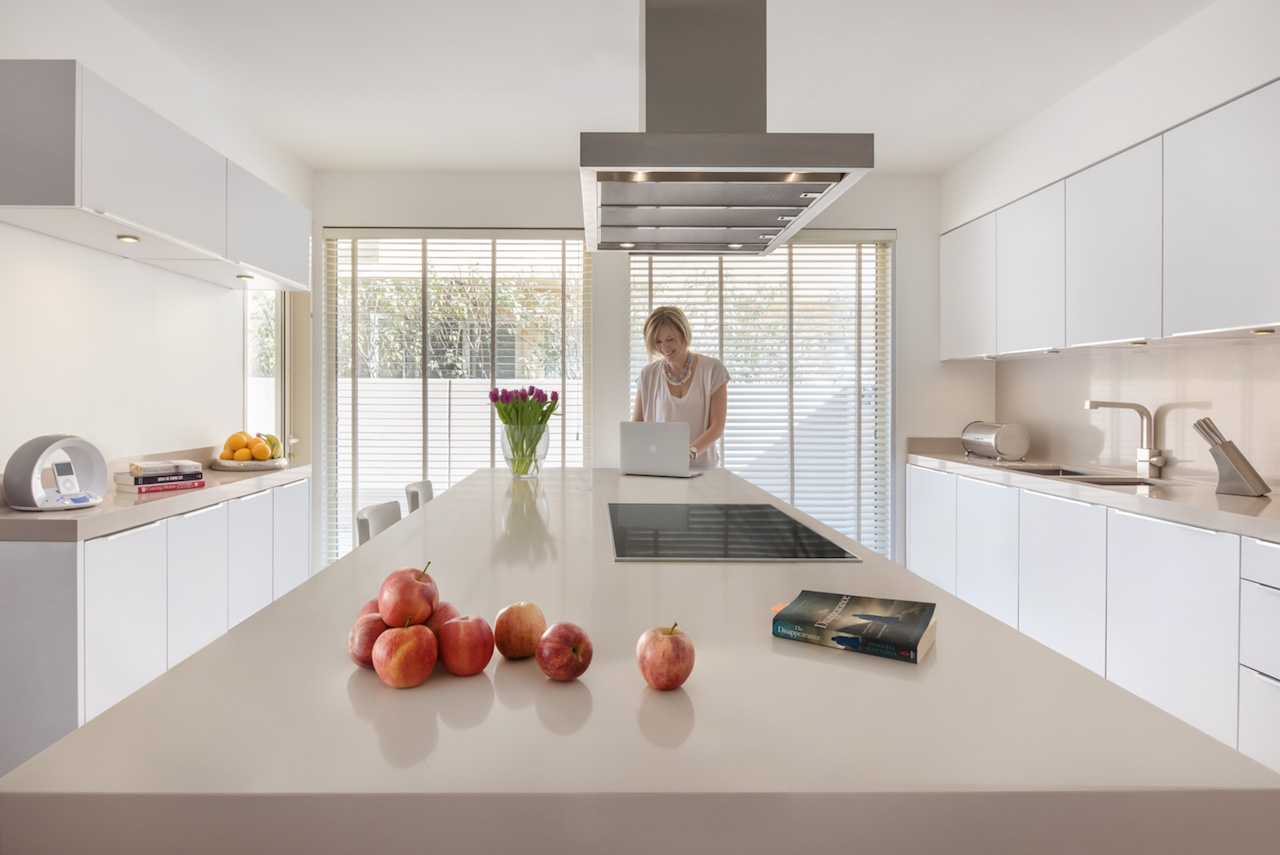 Annabel Kantaria is a published author, who in 2013, won the inaugural Montegrappa Prize for First Fiction at the Emirates Airline Festival of Literature.  This lead to being discovered by top London agent, Luigi Bonomi, who helped her secure two defining contracts as an author, a three-book contract with Harlequin’s MIRA and another three-book contract with HQ at Harper Collins.

Annabel first moved to Dubai in 1998 where she worked as a freelance journalist and a radio producer, and later become the Editor of Emirates Woman before leaving in 2007.  She lives in Dubai with her husband and her two children, and for 7-years shared as an ‘expat blogger’ for The Telegraph her experiences and encounters of life in the Middle East.  Her debut novel, Coming Home, was published in 2015, and Annabel has since published two other books, The Disappearance and The One That Got Away.  The One That Got Away is out in the shops this month.

Annabel has since taken a project on of a another kind to renovate her kitchen.  As we are huge fans of interiors, we wanted to share her stunning kitchen that is homely, perfect for a family and its calming colour scheme.

Why did you choose Hacker Kitchens?

I looked at a few companies but I chose Hacker in the end because of the company’s reputation for quality, and because I believed the team would deliver the job without cutting corners. I’d had my kitchen updated eight years ago using a local contractor (now out of business) and it had been a disaster: I paid a fortune and ended up with a substandard job that started to deteriorate just months after it had been completed. I was determined that if I did the kitchen again, it would be a ‘forever’ job.

I talked to a few companies when researching the new kitchen and I can’t recommend Hacker Kitchens highly enough. They held my hand throughout the entire design process and then worked with me to fit my budget. They delivered everything when they said they would and were lovely to work with throughout.

What was the most important aspect for you as a family in terms of design and functionality?

I obviously wanted the kitchen to look amazing, but everything had to work efficiently as well, as I spend a lot of time cooking. We moved a few things around in order to make the ‘flow’ of the kitchen work better. This was no small job but I’m so glad we did it as the layout of the kitchen now makes so much more sense.

How long did the process take and how did your family manage during the installation period?

The design took a few months as I was backwards and forwards with our very patient designer at Hacker Kitchens, as I made sure I got everything where I really wanted it. Then the entire job took about two months. The bulk of this, though, was contractor work prior to the units being installed. The actual installation of units doesn’t take long at all, maybe just a few days, then it’s another wait for the worktops to be measured for and cut and fitted.

We basically set up a makeshift kitchen in the living room by moving the fridge/freezer in there and setting up a camping table on which I had the slow cooker, the microwave and an electric two-pan hob. I’d planned to buy in lots of food but I don’t think we even had one take-away in that period… I got creative with the slow cooker and even made a lasagne in it. Otherwise I cooked one-pot dishes such as curries and Bolognese on the hob and always made large batches that I could freeze and re-heat in the microwave. It didn’t seem a hardship at all. Doing the washing-up in the bathroom was the worst bit.

What made you choose this stunning soft cashmere style?

I love pale colours. I find them very peaceful. Our house is largely white and our last kitchen had been white with black granite tops. I felt the black and white was looking dated so opted for this more modern look, and I absolutely love it. Polar White high gloss cabinets with integrated satin steel handles contrast beautifully with the cool grey quartz worktop and interior drawers in lava grey. The worktop was extended into the splash back giving continuity and also great durability. It’s so calming and looks very luxe.

You chose Miele for appliances. What made you choose this brand and how has this worked out for you in terms of practicality?

Hacker Kitchens recommend Miele and work closely with them. Miele themselves offer a super service of fitting the appliances and then sending a technician to ‘train’ you in how to use them. I’m very pleased with all the appliances: the induction hob is really fast, and both ovens are lightyears ahead of the cumbersome old one I had previously. It never ceases to amaze me how fast they heat up!

Has the kitchen made a lifestyle impact on your family?

The kitchen makes me smile every single time I walk into it, and I really, really love using it. Everything flows; everything’s in the right place; the cupboards close beautifully; and everything’s well organised and has a home.

In terms of the family, we fitted an island that seats five people and we often end up eating family meals together there, instead of setting up the dining table. It’s also great when I have people over for dinner and I’m just finishing up the cooking – guests sit there with their drinks and chat to me while I get the food ready.

Did you manage to stay within your allocated budget within the project?

Yes, Hacker was very good at helping me make choices that worked with my budget. I hadn’t realised you could tailor things to match your budget. I did blow it a bit on the Miele appliances, though. This is my fault because I chose to install a 90cm oven that has the most amazing features and automated programmes such as proving dough, steam-cooking meat and so on. Maybe if I’d stuck to the 60cm one I’d have come in on budget!

What are your three favourite key features of the kitchen?

I love the deep drawers. I get so much joy from not having to scrabble inside dark cupboards to find things. I love the soft-close on all the cupboards and drawers, and I love the larder units with the glass slide-out drawers. Small things that make me happy!

Your latest book, The One That Got Away is out in September. Can you tell us a little more?

The book’s about a pair of teenage sweethearts who meet up after 15 years and get back together. But things are not as nice as they may appear on the surface. It’s quite a dark story of obsession, coercive control, secrets and revenge.

How has winning the Montegrappa Prize at the EAFOL in 2013 changed your life as an author?

Ultimately, winning that competition turned me from an unpublished writer into an author with a three-book deal from Harper Collins. It’s very hard to get an agent and a publishing deal in London: the Montegrappa prize won me the attention of Luigi Bonomi, a top London agent. He then took me on as a client and secured me a book contract. Before I won the competition, I thought the prize would simply be a validation of my work: looking back, I now see that winning that prize was the beginning of my new career. Last year I won a second three-book deal with Harper Collins so I’ll have six books out by 2020.  I honestly feel I can call myself an author now!

How do you discipline yourself to write while juggling your children’s routine?

I work when they’re at school. The children leave with my husband at 7.15am and, as I’m most productive and creative first thing in the morning, I get straight onto the computer and work as long as I can before taking a break. I try to do some exercise late morning, otherwise I’d just be moulded to my seat then, after lunch, I have another session of about an hour before picking up the children and starting on the whole after-school sports / homework  / dinner-cooking palaver. If I can get any work done in the afternoon it’s a bonus, but I don’t rely on that time: the children are my priority, and I cook dinner every single day.

In the school holidays, I try to finish work by 10am so the children and I can spend the bulk of the day doing something together. I find if I’ve got my work out of the way early, I can relax. If I know it’s still got to be done, I’m on edge all day.

What do you hope to instil in your children as they grow up in Dubai?

I’m very keen that they learn to be self-sufficient and not get used to having things done for them; and that they keep their feet on the ground. I also try not to over-schedule them into activities – it’s important to me that they learn to amuse themselves with whatever limited resources they may have to hand rather than being in organised activities all the time.

Your favourite restaurant for date night?

We don’t have one. Generally, we‘d both rather stay home and hang out in the garden than go anywhere really fancy. The last place we went that I really enjoyed, though, was Gordon Ramsay’s Bread Street Kitchen. They had a lovely vegetarian Wellington. I love it when restaurants make an effort to provide something interesting for vegetarians that goes beyond the ubiquitous mushroom risotto, pizza and pasta Pomodoro.

Your favourite place to write?

At home in my study. Sometimes at the dining table. Occasionally in a café. But generally anywhere where no-one’s going ‘Mummy… mummy…’