Breast Cancer Awareness Month | Karen Mellor, mum of 2, shares her story in the hope of encouraging others to do regular self examinations. 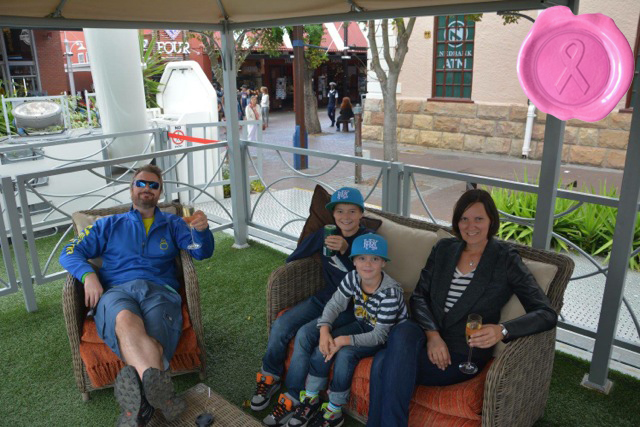 Karen Mellor is a British mum of two boys, who was diagnosed with breast cancer at only 36 years old back in 2011, and thanks to early detection it helped her chances of beating the cancer.  The Mellor family were an expat family in Dubai but were reposted last year.  We applaud Karen’s openness to share her story to encourage others to do regular check-ups that might save their lives.

Today, unbelievably, is the start of October, another year has passed and I’m reminded by several emails and social media posts that it’s also the start of Breast Cancer Awareness Month.

So I find myself reflecting on life more than any other month of the year. Not least because October is a very special month for me, a month in which I celebrate my own birthday (and yes I am about to embark on my 42nd year which is scary enough!), but my eldest son’s too, soon to be reaching his very own double figures. I’m sure there are lots of women like me in their forties who would rather not be reminded about age, but to me each and every milestone is a true celebration of how far I’ve come and how far I will continue to reach.

There are not many people who I’m acquainted with who don’t know my story. It’s never been a secret, in fact from the moment I was diagnosed with breast cancer in 2011, one of my coping mechanisms was to share my agony, thereby gaining all the support I possibly could from friends and family.

Breast Cancer remains one of the most common of all cancers. In the year I was diagnosed, just under 50,000 other women were also diagnosed. It’s hard to imagine that there are many people who are unaware of this disease. So why does the world ‘turn pink’ every October in recognition that it’s Breast Cancer Awareness Month? One clear reason I believe is that this particular disease resonates with each and every one of us in some form or another. A family member, a friend, a colleague, we all know someone affected by it. Therefore, we all want to make a difference, and we know that funds raised throughout October will support women receiving treatment and be put towards essential research into combatting the disease. More importantly though, the main focus of the campaign is awareness, and whilst most people are aware of breast cancer, with our busy lives it is far too easy to forget what steps we need to take to detect the disease in its early stages and encourage our friends to do the same.

My biggest saviour was reasonably early detection, although I know I could have done better! If I had been more aware of the importance of self examination, I could well have found my lump weeks or even months earlier than I did. I was 36 years old, a mother of two young boys aged 5 and 2, both of whom I had breastfed for 8 and 14 months respectively (a factor which I had always believed helped to lower the risk of breast cancer!). With no direct family history of the disease, whilst I was obviously aware of breast cancer, the thought of actually facing a diagnosis at my age, or indeed any age, had never ever crossed my mind. I considered myself completely low risk and therefore had never carried out a self examination. As a British woman, I also fell under the category of screening mammograms being given between the ages of 50 – 70. So why on earth should I be worried? Little did I realise how many women under the age of 40 with breast cancer I would meet along the way, and even some under 30 – scary huh!

You may be intrigued to learn how I discovered anything was wrong. I was simply washing in the bath, and felt a lump in my left breast. It didn’t feel very large, but it was enough for me to call my husband to check too, to corroborate my concerns that there was actually a lump and I wasn’t imagining its existence. Despite my ‘low risk’ status, I knew enough to get straight onto the doctors and the following morning I made a GP appointment. Luckily I was in the UK at the time, and although the GP suspected fibroadenoma and said “I don’t think there is anything to worry about”, I was referred to the Breast Clinic for a full check-up within 2 weeks.

This initial 2 week period was reasonably unsettling, I didn’t want anyone to worry unnecessarily so I kept very calm, reminded myself of the GP’s reassurances, and carried on with my day to day life, although I did do lots of googling into the early hours most nights!

Two weeks passed, and within approximately 30 seconds of lying on a bed being examined by the leading breast nurse, I knew something was seriously wrong. What I didn’t know then, but something that is vital in raising awareness, is that I also had a lump under my arm. Before any mammograms, biopsies or scans, the nurse simply said “You do know you have a lump under your arm too?”, and that was the moment I knew I was in trouble and the tears started to flow.

Self examination can be the difference between early detection and the cancer spreading. Timing for me was essential. I strongly believe that if I hadn’t found the lump when I did, and had my aggressive 5-6cm tumour been left undiscovered any longer, just a few more weeks and it would have spread well beyond my lymph nodes which I’m pleased to say did their job properly for me and acted as a stop gap for long enough.

The scariest part for me, and I’m sure for many many women, is the initial diagnosis, the not knowing, and the waiting for scans to see if the cancer has spread. It’s the first few weeks of checking, waiting, and then planning the treatment that are so difficult. Once I knew what I was dealing with, I could deal with it and attack it with a positive and strong ‘I will not let this beat me’ attitude.

And there are so many ways that women can help themselves, and should help themselves from their 20’s upwards by carrying out self examinations. Nobody knows their own body better than themselves. We know the ways our body can change from month to month, and by checking once a month, we can identify more easily than any medic whether something is not quite right. And that’s when we can get the experts involved.

Self examination awareness is to me what October as Breast Cancer Awareness Month is primarily about. It’s about reminding my sisters, telling my friends, and anyone else who will listen, to follow the easy steps to knowing if something is wrong. It’s about knowing the signs, being aware that a lump, a change in size of a breast, discharge from the nipple, a lump or swelling in either armpit, dimpling of the skin, a rash around the nipple, or a change in the appearance of the nipple, are all things that should be checked out by a doctor without delay.

For more information about self examination, go to: