When you think about fairytales certainly Cinderella comes to mind. Whether you read it as a child or you have seen it several times with your children at home; it’s one of the most iconic stories until today. The enchanting story of a girl, who was mistreated by her cruel stepmother and stepsisters and with the help of her Fairy Godmother, went to a ball only to sweep the Prince’s heart away. Written versions were first published in 1634, made its way through the hands of Brother’s Grimm and was immortalized by Disney in its 1950 animated movie.

in a live-action version of the famous tale, inspired by its 1950’s adaptation and with several twists to the story, to be released this March. The film stars Cate Blanchett as Lady Tremaine (the stepmother), Lilly James as Ella, Richard Madden as Prince Charming and Helena Boham-Carter as the Fairy Godmother. , licensing, Disney Entertainment at Disney Consumer Products. “Each pair of shoes in this exciting global collection captures Cinderella’s elegance and grace through the lens of celebrated designers, making this shoe collection truly fit for a princess.”

Swarovski, which produced the iconic glass slipper for the film under the direction of Academy Award®-winning costume designer Sandy Powell, provided the crystals featured in the designers’ shoes.

The exclusive shoe collection will be available to order at selected retail stores around the world. Head to one of these stores if you fancy a pinch of Disney magic in your own closet. (Please contact the stores and/or designer brands for specific availability) “The magic of a shoe that turns a woman into a princess and gives her the feeling of walking on clouds is a universal dream. A modern Cinderella fairy tale of rediscovering a soft sensuality and a powerful femininity. A shoe made of transparency platform shoe made with my signature PVC & perspex materials is adorned with star and crystal detailing as befits any princess.” “I think every girl desires a Cinderella moment in their lives. This story ignites a love affair and fascination with shoes that never dies. The power they have to transform is instilled from a young age and the fantasy remains alive forever. I wanted to create a shoe that felt magical, with alluring sparkle and a feminine, timeless silhouette evoking those childhood emotions “Cinderella has both delicate and strong qualities as a character. The moment of transformation emphasises both and gave me the design inspiration to create a piece that spoke to the film’s magic.” “Cinderella in 2015 has a timeless appeal. The diamond and translucent bootie enhance the vision I have of her.” . I reinterpreted our classic Johanna pump, this time giving it a fashionable and romantic twist with satin and Swarovski crystals. It’s a shoe I imagine a modern princess would wear.” . Passion and never ending research don’t draw the line at fantasy and creativity. This is how dreams come true in our fairy tale.” “Cinderella’s glass slipper represents every woman’s dream shoe. The story, being a classic, inspired me to use my iconic pointed toe silhouette, which I embellished with an array of hand encrusted Swarovski crystals to create the ultimate fantasy shoe. I used transparent

PVC to create a ‘glass’ effect and ivory suede for luxurious texture and dimension.” “The stroke of midnight is a wonderful element of the Cinderella fairy tale, it adds tension and intensity to the story. I was inspired by that when I designed this style for Cinderella and the result is a dramatic midnight-blue glitter sandal on a sky-high heel. The clear strap is reminiscent of the crystal slipper, while the refined gold

and silver trims add the right amount of whimsy to the design. I wanted to create something that, if left behind, the Prince would feel even more captivated by Cinderella’s allure.” 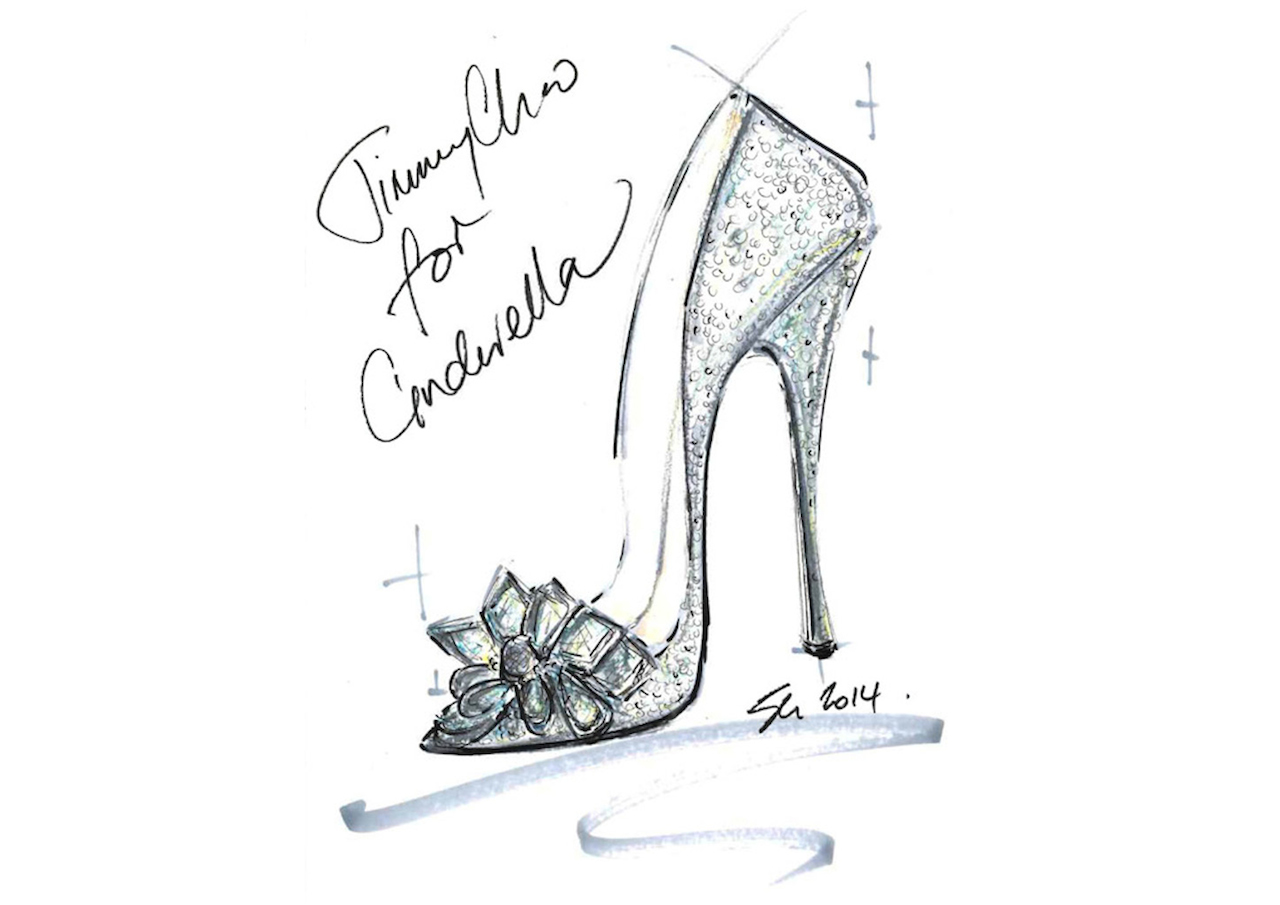